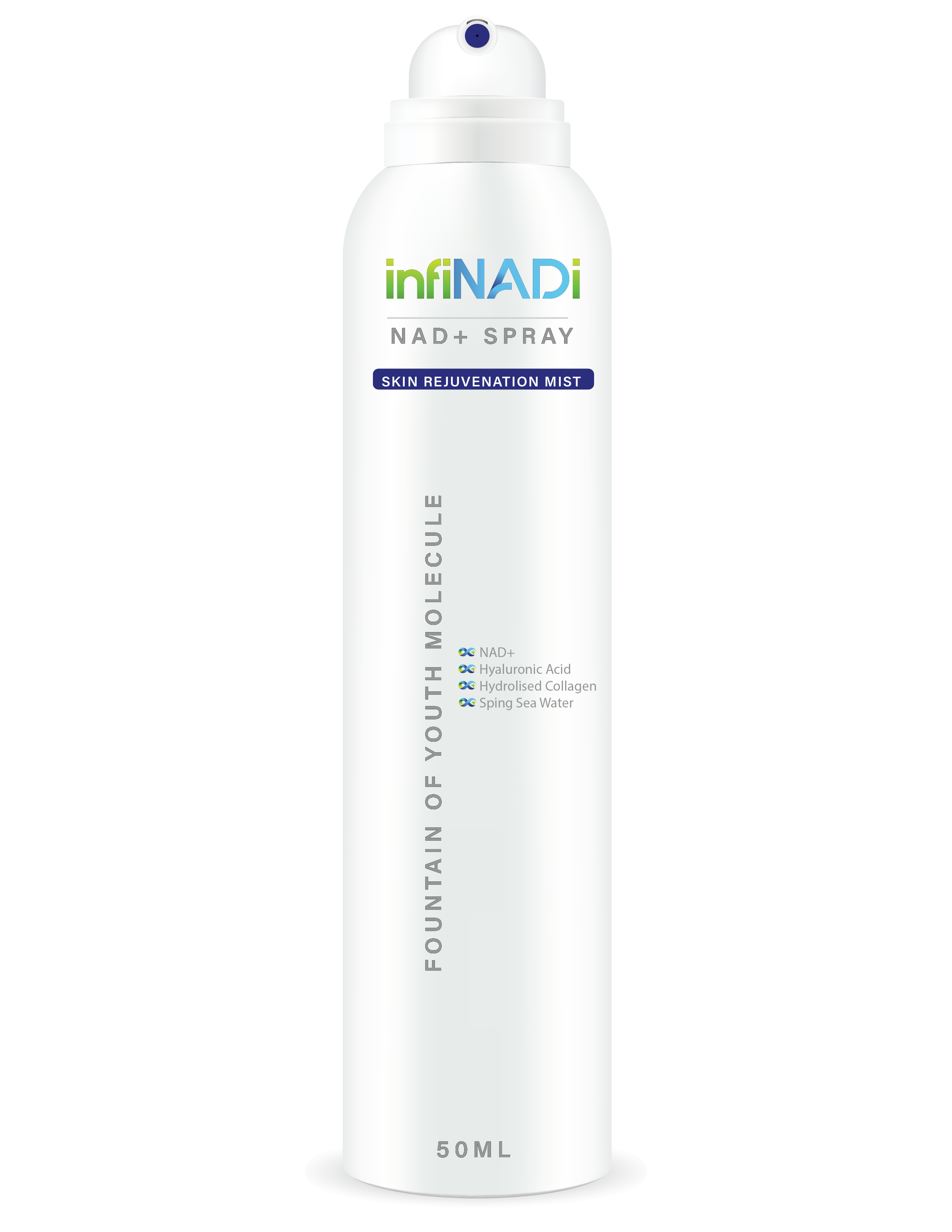 For topical application to the skin.

For topical application to the skin, cosmetic additive, or refill for nanospray devices 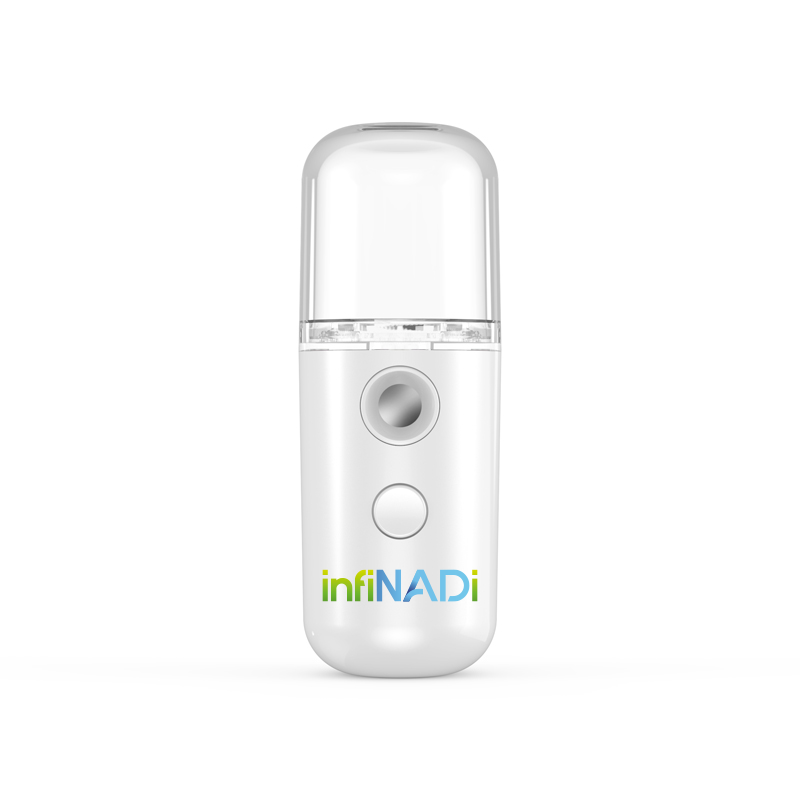 Nano-level spray, can use anytime and anywhere, the spray is fine and the amount of mist is large.

It can support the addition of a small amount of skin care product mixed with infiNADi topical solution to compliment your daily skin care routine. 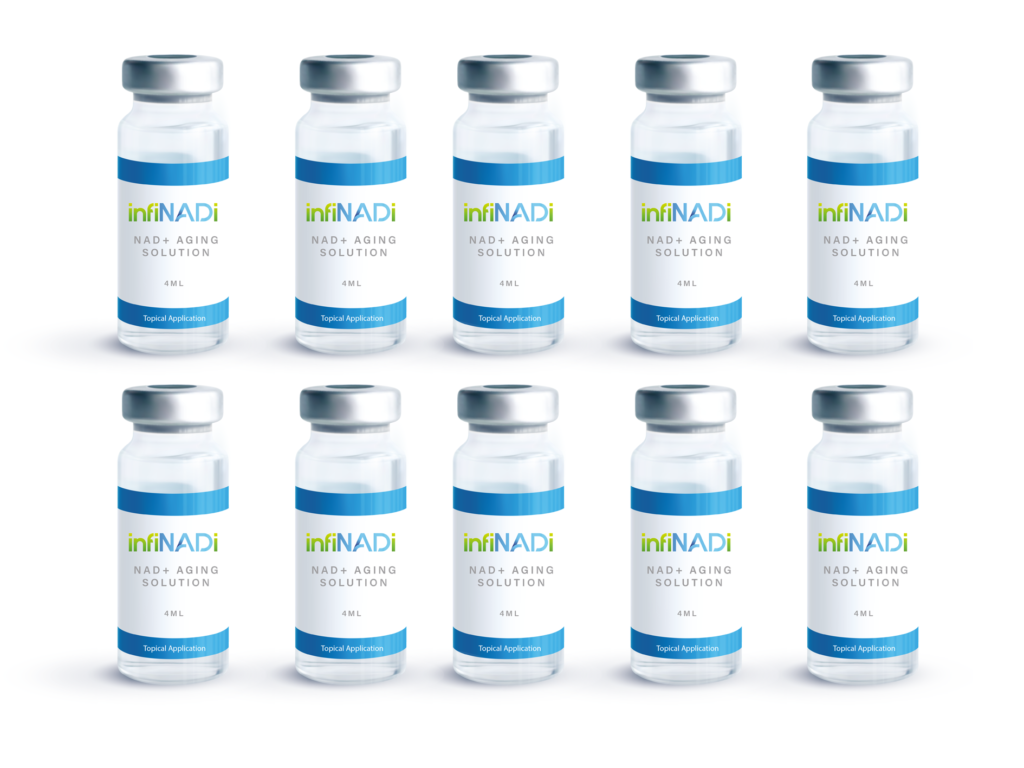 10 vials of infiNADi NAD+ aging solution for topical application or to refill a reusable Nano-Mist Device.

NADh is a molecule which has potential to impact the dermal and epidermal signs of photo and aging. Disodium NADH is an active ingredient for pharmaceutical, health food and cosmetic industries, in cosmetic industries it is used for emollients and skin conditioning.

Depleted levels of NADh in the skin can lead to UV sensitivity, DNA damage and may lead to increased wrinkles by weakening the bond between dermis and epidermis of aged skin.

Research has been shown the topically applied Niacin derivatives such as NADh may prevent dermal matrix degradation by inhibiting the enzymes that break down collagen and promote an optimal physiologic environment: the enhancement of cell activity, hydration, and the synthesis of collagen, elastin and HA (hyaluronic acid).

NADh has been identified as the key to overall skin health and its status is critical in preserving genomic stability. A genome is an organism’s complete set of DNA, including all of its genes. Tissues with a high cellular turnover, such as the skin, require higher doses of NAD+ to counteract daily genomic threats.

Skin aging is driven by a combination of external and internal factors such as sun exposure (UV), stress, environmental toxins and the natural mechanisms of aging occurring in all cells and tissues.

Raising NADh levels in the skin via topical application may help inhibit several mechanisms of aging at once and is a promising approach to skin rejuvenation.

Some areas which Nicotinamide which serves as a precursor of nicotinamide adenine dinucleotide, or NADh play a role in skin health:

Sun protection starts with sunscreen, but these days it doesn’t end there. Faced as we are with higher temperatures and more sunny days, additional strategies are needed to ensure protection against the mutagenic and immune suppressive effects of sunlight. Nicotinamide and NADh, which has little or no toxicity even at high doses, “has photoprotective effects against carcinogenesis and immune suppression in mice, and is photoimmunoprotective in humans when used topically or as part of a lotion.”

In addition to providing photoprotection, enhancing DNA repair, reducing susceptibility to immunosuppression, and boosting cellular energy, other studies  show that nicotinamide reduces actinic keratoses.  This is good news for those of us wanting to address age spots for cosmetic reasons.

Studies reporting improvement in aging skin via topical vitamin B3  were in the literature long before this summary report published in 2005.  “Analyses of the data revealed a variety of significant skin appearance improvement effects for topical niacinamide: reductions in fine lines and wrinkles, hyperpigmented spots, red blotchiness, and skin sallowness (yellowing). In addition, elasticity (as measured via cutometry) was improved.

The latest developments are even more promising

When using niacinamide or NADh as part of sensitive/reactive skin care protocols, Its anti-inflammatory properties have made it a mainstay in the atopic dermatitis, adult acne treatment categories as well.

Niacin derivatives, in particular nicotinamide and NADh, stimulate elastin and fibrillin in fibroblasts and inhibit MMP (matrix metalloproteinases are enzymes that break down collagen) or elastase (an enzyme that breaks down elastin) activity. “Overall, the niacin derivatives have anti-skin aging potential through the stimulation of elastin and fibrillin, and the direct inhibition of the extracellular matrix proteolytic enzymes.”  This is the type of collagen building our laudable vegans can jump on board with.

Mitochondria are structures located in the cell’s cytoplasm outside the nucleus. They are responsible for energy production; besides converting nutrients into energy they also perform many other specialized tasks. Mitochondria are of particular importance to cell health, as they function primarily to produce adenosine triphosphate (ATP), the energy of the cell. You can compare them to the lungs of the cell, in that they drive cell respiration.

Normal mitochondrial function also produces ROS (reactive oxygen species or free radicals) and skin care companies have been using the antioxidants known to scavenge ROS such as L-ascorbic acid, tocopherol and polyphenols for a number of years. But we haven’t paid as much attention to mitochondrial ROS. This is where NADh springs into action.

Coenzymes play important roles in many enzymatic reactions, which at least partially explains the exceptionally broad spectrum of effects that topical niacinamide exhibits on skin. Among those multiple effects, niacinamide has been shown to decrease ROS production by mitochondria and to extend the replicative lifespan of fibroblasts, an effect that points to the boosting of mitochondrial function and the protection of the mitochondrial genome.”

Original studies showed that niacinamide and Niacin derivatives such as NADh are useful in the treatment of a wide range of dermatological conditions, including autoimmune blistering disorders, acne, rosacea, aging skin and atopic dermatitis.

But we are discovering that its benefits are far more extensive. New studies show niacinamide’s positive impact.

For more information on Replay Placenta Extract, please complete the form or email us at: info@replayplacenta.com